What is a ventilated façade 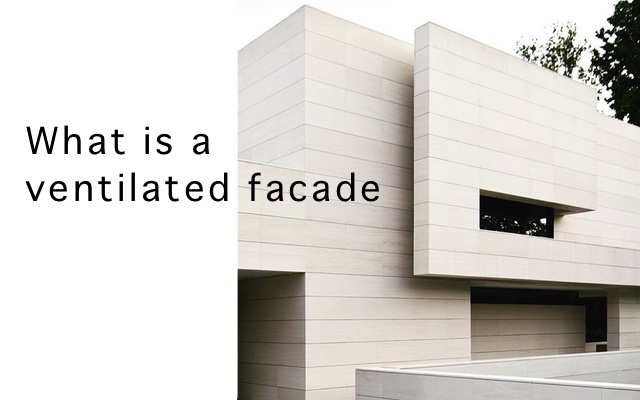 Ventilated façades are an outdoor cladding building solution that can be applied to both new build and refurbished buildings. It is of special interest to architects for a number of reasons such as:

Ventilated façades allow for the circulation of air between the supporting wall and the cladding material, such as marble, ceramic tiling, metallic panels, etc. In this manner, the supporting wall is protected from both the cold and heat resulting in energy savings. 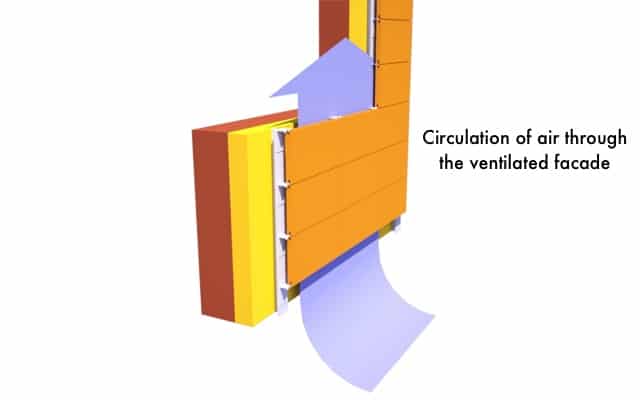 Air circulating in the chamber of the ventilated facade

Any type of façade enclosure that may be used as a support to attach the ventilated façade. This can be a concrete or ceramic brick wall.

This is the material that provides thermal and acoustic insulation. It must be a continuous finish in order to avoid thermal bridging. Among the most commonly used options are projected or adhesive mortar bonded insulation.

These types of façades may be attached with any of the following methods:

Cladding installation is the last step in the ventilated façade process.

One of the most adequate materials to use in ventilated façades are the 3cm thick natural stone slabs, since these allow for a correct attachment with any of the above described methods. There is no specific slab size required for this type of façades. On the other hand, we must avoid using raw cut and polished natural stone finishes.

Following is a list of natural stones that can provide a good performance for this building system: 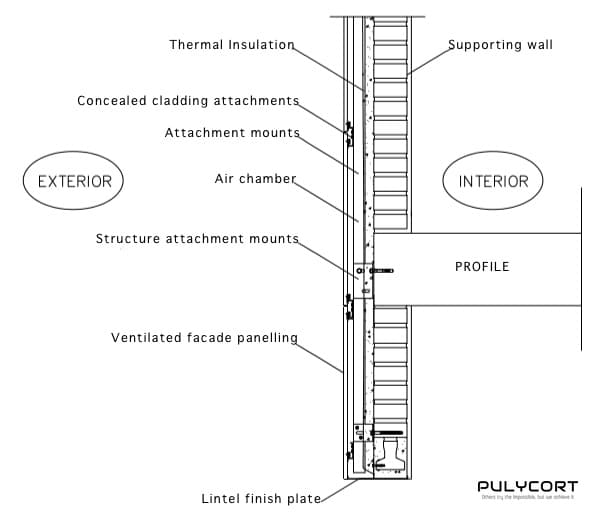 Elements of a ventilated façade

How do ventilated façades work

Ventilated façades have a different type of performance depending on the outdoor temperature, varying greatly between seasons.

During the summer, the air chambers work like a chimney, i.e., sunlight hits the façade heating up the cladding and also the chamber. This hot air then rises making room for cooler air to cool down the chamber and maintaining the comfort inside the home.. 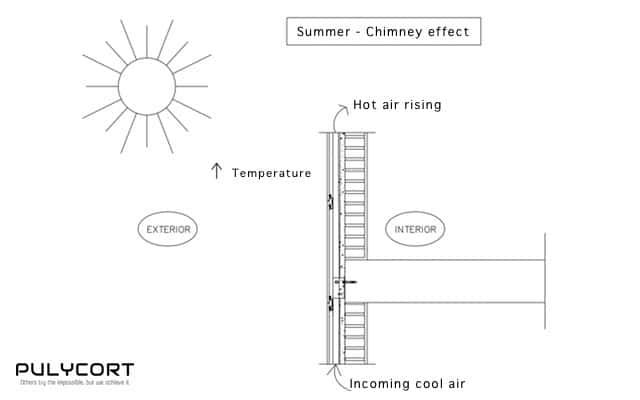 Operation of a ventilated façade in summer

In the winter, solar radiation is not as strong as to produce this chimney effect. However, the air inside the chamber remains warmer than the outdoor air, producing the effects of a heat accumulator that maintains the system’s thermal stability along with the thermal insulation that is attached to the supporting wall.

Operation of a ventilated façade in winter

Any cookies that may not be particularly necessary for the website to function and is used specifically to collect user personal data via analytics, ads, other embedded contents are termed as non-necessary cookies. It is mandatory to procure user consent prior to running these cookies on your website.

Previous Next
Close
Test Caption
Test Description goes like this